On 19 April 1943, members of the Belgian Resistance stopped a Holocaust train and freed a number of Jews who were being transported to Auschwitz concentration camp from Mechelen transit camp in Belgium, on the twentieth convoy from the camp. In the aftermath of the attack, a number of others were able to jump from the train too. In all, 233 people managed to escape, of whom 118 ultimately survived. The remainder were either killed during the escape or were recaptured soon afterwards. The attack was unusual as an attempt by the resistance to free Jewish deportees and marks the only mass breakout by deportees on a Holocaust train.

Main article: The Holocaust in Belgium

Between 70,000 and 75,000 Jews were living in Belgium in 1940.[2] Few were long-term residents and many entered the country during the Interwar to flee persecution in Germany and Eastern Europe.[2] Soon after the German invasion of Belgium in May 1940, the German occupation authorities introduced a number of anti-Jewish laws. In 1942, the yellow badge was introduced for all Belgian Jews. In August 1942, as part of the Final Solution, the deportation of Belgian Jews to concentration and extermination camps in Eastern Europe in sealed railway convoys began.[3]

Of these, 46 percent were deported from the former Mechelen transit camp, while 5,034 more people were deported via the Drancy internment camp (close to Paris). The Reichssicherheitshauptamt (RSHA) in Berlin was responsible for organizing the transport and the chief of the Dossin Barracks (sammellager) prepared the paper convoy list in triplicate. One copy was for the police officer in charge of security during the transport, the second for the sammellager in Mechelen and the third for the BSD-department located in Brussels. Because all the copies for the Dossin Barracks were preserved, historians have been able to trace and map all the German transports of Belgian Jews to the concentration camps. From the summer of 1942 until 1944, twenty-eight transports left Belgium to bring 25,257 Jews and 351 Roma to Eastern Europe.[4] Their destination was usually Auschwitz-Birkenau.[4] 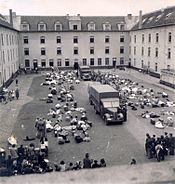 On 19 April 1943, the twentieth transport left Mechelen transit camp carrying 1,631 Jewish men, women, and children.[1] For the first time, the third-class carriages previously used were replaced by freight wagons with barbed wire covering the small windows. A special wagon, Sonderwagen, was added with 19 Jews (18 men and one woman) consisting of resistance members and "jumpers" from previous transports. These "special list" prisoners were marked on the back of their clothes with a cross painted in red so that guards would know to execute them immediately on arrival at Auschwitz. Eventually, three prisoners escaped from the wagon; a fourth was shot.

Three young students and members of the Belgian resistance including a Jewish doctor, Youra Livchitz (fr) and his two non-Jewish friends Robert Maistriau[5] and Jean Franklemon (fr), armed with one pistol, a lantern, and red paper to create a makeshift red lantern (to use as a danger signal), were able to stop the train on the track Mechelen-Leuven, between the municipalities of Boortmeerbeek and Haacht.[1] The twentieth convoy was guarded by one officer and fifteen men from the Sicherheitspolizei (SiPo-SD), who came from Germany. Despite these security measures, Maistriau was able to open one wagon and liberate 17 people.[1]

Other prisoners escaped from the convoy without any connection with the attack. The train driver, Albert Dumon, did all he could to keep the slowest pace between Tienen and Tongeren, stopping whenever it was possible and justifiable, and so allow that more people could jump without killing themselves.

In all, 233 people succeeded in escaping from the train.[1] 89 were eventually recaptured and put on later convoys.[1] 26 others were killed, either by shooting or by the fall, and 118 who succeeded in escaping.[1] The youngest, Simon Gronowski, was only 11 years old.[1] Regine Krochmal (fr), an eighteen-year-old nurse with the resistance, also escaped after she cut the wooden bars put in front of the train air inlet with a bread knife and jumped from the train near Haacht. Both survived the war. 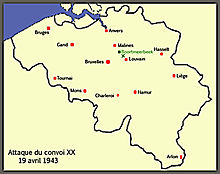 The site of the attack on the convoy within Belgium

On April 22, 1943, the train arrived at Auschwitz. During the selection, only 521 ID numbers (276 men and 245 women) were assigned. Assigned as slave laborers, and only 150 of the 521 ultimately survived the war. The remaining 874 non-selected people were immediately murdered in the gas chambers of Auschwitz II-Birkenau. It is believed that, as a result of the escape, an unusually large proportion of the prisoners from the convoy were killed on arrival.[1] As many as 70 percent of the female prisoners were killed immediately in the gas chambers, while the rest were assigned for medical experimentation.[1]

Items used during the attack, now in the collection of the Kazerne Dossin Museum in Belgium

The attack was unusual as an attempt by the resistance to free Jewish deportees and marks the only mass breakout by deportees.[1]

The twentieth convoy was an exceptionally large convoy and was the first transport to use freight cars with doors fenced with barbed-wire. The previous transports used third-class wagons on which it was easy to escape through the windows. After the twentieth convoy, each convoy was reinforced with a German reserve company (based in Brussels) until it reached the German border.

The three resistance members who executed the raid met the following fates:

In remembrance of the action of the resistance, a statue was inaugurated in 1993 near the train station of Boortmeerbeek. It remembers the Holocaust and the transport of 25,483 Jews and 351 Roma over the railway track Mechelen-Leuven to the concentration camps.[1]