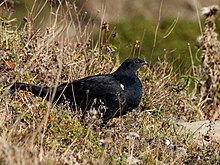 As with many gamebirds, the cock (male) is larger than the hen (female), measuring 50–55 cm compared to her length of 37–42 cm. The cock is very distinctive, with all-black plumage, apart from red eyebrows, and a long, deeply forked tail. The female Caucasian grouse is grey with dark barring, and has a cackling call.[2]

It occurs in extreme southeastern Europe and adjacent regions.[3][4] The scientific name of this bird commemorates the Polish naturalist Ludwik Mlokosiewicz. The Caucasian grouse is a sedentary species, breeding in the Caucasus and Pontic Mountains of northeast Turkey and iran on open slopes with low Rhododendron or other scrubs but in proximity to deciduous broad-leaf forest.[4]

They have a group display or lek in May and June. Unlike the male Eurasian black grouse, the Caucasian grouse display is almost mute but for a thin whistling of the cock fluttering his wings as he leaps and turns in the air, producing a flash of white as the underwing feathers are briefly revealed.[2] The hen lays up to ten eggs in a ground scrape and takes all responsibility for nesting and caring for the chicks, as is typical with gamebirds.

It is perhaps the least-studied of all grouse in the world, and it was formerly classified as Data Deficient by the IUCN.[1][5] Recent research shows that it is declining to some extent, and it is consequently listed as a Near Threatened species in 2008[6] with an estimated population of 30,203–63,034 worldwide in 2010.[4] Conservation efforts have included encouraging ecotourism as a way to promote awareness of the bird and its habitat.[7]