FeFET based devices are used in FeFET memory - a type of single transistor non-volatile memory.

In 1955, Ian Munro Ross filed a patent for a FeFET or MFSFET. Its structure was like that of a modern inversion channel MOSFET, but ferroelectric material was used as a dielectric/insulator instead of oxide.[1] Use of a ferroelectric (triglycine sulfate) in a solid state memory was proposed by Moll and Tarui in 1963 using a thin film transistor.[2] Further research occurred in the 1960s, but the retention characteristics of the thin film based devices was unsatisfactory.[3] Early field effect transistor based devices used bismuth titanate (Bi4Ti3O12) ferroelectric, or Pb1−xLnxTiO3 (PLT) and related mixed zirconate/titanates (PLZT).[3] In the late 1980 Ferroelectric RAM was developed, using a ferroelectric thin film as capacitor, connected to an addressing FET.[3]

FeFET based memory devices are read using voltages below the coercive voltage for the ferroelectric.[4]

Provided the ferroelectric layer can be scaled accordingly FeFET based memory devices are expected to scale (shrink) as well as MOSFET devices; however a limit of ~20 nm laterally may exist[6] (the superparaelectric limit, aka ferroelectric limit). Other challenges to feature shrinks include : reduced film thickness causing additional (undesired) polarisation effects; charge injection; and leakage currents.[5] 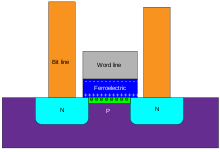 Structure of a 1 Transistor FeRAM cell

In 2017 FeFET based non-volatile memory was reported as having been built at 22nm node using FDSOI CMOS (fully depleted silicon on insulator) with hafnium dioxide (HfO2) as the ferroelectric- the smallest FeFET cell size reported was 0.025 μm2, the devices were built as 32Mbit arrays, using set/reset pulses of ~10ns duration at 4.2V - the devices showed endurance of 105 cycles and data retention up to 300C.[7]

As of 2017[update] the startup 'Ferroelectrc Memory Company' is attempting to develop FeFET memory into a commercial device, based on Hafnium dioxide. The company's technology is claimed to scale to modern process node sizes, and to integrate with contemporary production processes, i.e. HKMG, and is easily integrable in to conventional CMOS processes, requiring only two additional masks.[8]