Jump to content
From Wikipedia, the free encyclopedia
(Redirected from Senate Committee on Commerce, Science and Transportation)
Standing committee of the United States Senate 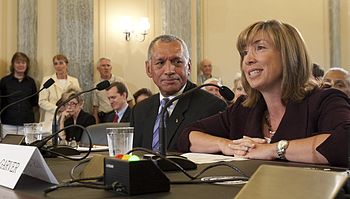 The United States Senate Committee on Commerce, Science, and Transportation is a standing committee of the United States Senate.[1] Besides having broad jurisdiction over all matters concerning interstate commerce, science and technology policy, and transportation, the Senate Commerce Committee is one of the largest of the Senate's standing committees, with 28 members in the 117th Congress. The Commerce Committee has six subcommittees. It is chaired by Sen. Maria Cantwell (D-WA) with Sen. Roger Wicker (R-MS) as Ranking Member. The majority office is housed in the Dirksen Senate Office Building, and the minority office is located in the Hart Senate Office Building.[1]

The original progenitors of this committee were:

In accordance of Rule XXV of the United States Senate, all proposed legislation, messages, petitions, memorials, and other matters relating to the following subjects is referred to the Senate Committee on Commerce, Science, and Transportation:

The Senate Commerce Committee is also charged to "study and review, on a comprehensive basis, all matters relating to science and technology, oceans policy, transportation, communications, and consumer affairs, and report thereon from time to time."[3]

The committee, under its various names, has been chaired by the following senators:[5]