Jump to content
From Wikipedia, the free encyclopedia
Specialized agency of the United Nations
"WMO" redirects here. For other uses, see WMO (disambiguation).

The World Meteorological Organization (WMO) is a specialized agency of the United Nations responsible for promoting international cooperation on atmospheric science, climatology, hydrology and geophysics.[2]

The WMO is made up of 193 countries and territories, and facilitates the "free and unrestricted" exchange of data, information, and research between the respective meteorological and hydrological institutions of its members.[5][6] It also collaborates with nongovernmental partners and other international organizations on matters related to environmental protection, climate change, resource management, and socioeconomic development.[7]

Headquartered in Geneva, Switzerland, the WMO is governed by the World Meteorological Congress, composed of member states, which meets every four years to set policies and priorities. The Congress is led by an Executive Council led by the President, currently Gerhard Adrian of Germany.[8] 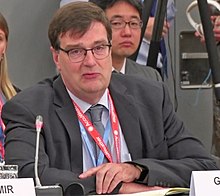 The WMO was established by the Convention of the World Meteorological Organization, signed 11 October 1947 and ratified on 23 March 1950. The Convention serves as the constituent treaty of the WMO, setting forth its purposes, governance, and general framework.

The annually published WMO Statement on the status of the World Climate provides details of global, regional and national temperatures and extreme weather events. It also provides information on long-term climate change indicators including atmospheric concentrations of greenhouse gases, sea level rise, and sea ice extent. The year 2016 was the hottest year on record, with many weather and climate extremes, according to the most recent WMO report.[10]

In keeping with its mandate to promote the standardization of meteorological observations, the WMO maintains numerous code forms for the representation and exchange of meteorological, oceanographical, and hydrological data. The traditional code forms, such as SYNOP, CLIMAT and TEMP, are character-based and their coding is position-based. Newer WMO code forms are designed for portability, extensibility and universality. These are BUFR, CREX, and, for gridded geo-positioned data, GRIB.[citation needed]

In 2007, the Intergovernmental Panel on Climate Change (IPCC), a joint creation of the WMO and the United Nations Environment Programme (UNEP), received the Nobel Peace Prize "for their efforts to build up and disseminate greater knowledge about anthropogenic (man-made) climate change, and to lay the foundations for the measures that are needed to counteract such change."[12] 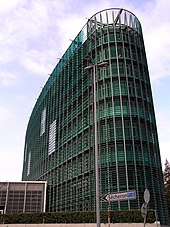 WMO headquarters in Geneva, shared with the IPCC and the Group on Earth Observations

The World Meteorological Day is held annually on 23 March.[13]

Use of the International System of Units[edit]

WMO states that "the International System of Units (SI) should be used as the system of units for the evaluation of meteorological elements included in reports for international exchange."[14] The following units, which include units which are not SI units, are recommended by the WMO for meteorological observations:

Ten United Nations member states are not members of WMO: Equatorial Guinea, Grenada, Liechtenstein, Marshall Islands, Palau, Saint Kitts and Nevis, Saint Vincent and the Grenadines and San Marino. Cook Islands and Niue are WMO Members but non-members of the United Nations. Vatican City and State of Palestine and the states with limited recognition are not members of either organization.

The member states of the World Meteorological Organization divided into the six regional associations, shown on a world map

Region I consists of the states of Africa and a few former colonial powers. Region I has 57 member states and no member territories:[23]

The member territories are:

Region III consists of the states of South America, including France as French Guiana is an overseas region of France. It has a total of 13 member states and no member territories:[26]

Region IV consists of the states of North America, Central America, and the Caribbean, including three European states with dependencies within the region. It has a total of 25 member states and 2 member territories. The member states are:[27]

The two member territories are:

The member territories are:

Region VI consists consist of all the states in Europe as well as some Western Asia. It has 50 member states:[29]

States with membership in more than one region[edit]

A total of ten member states have membership in more than one region. Two nations are members to four different regions, while eight are members of two regions. These nations, with their regions, are as follows:

Wikisource has original text related to this article:
Convention of the World Meteorological Organization