Jump to content
From Wikipedia, the free encyclopedia
Former multi-purpose stadium in Toronto
For other uses, see Exhibition Stadium (disambiguation).

Canadian National Exhibition Stadium (commonly known as Exhibition Stadium or CNE Stadium) was a multi-purpose stadium that formerly stood on the Exhibition Place grounds, in Toronto, Ontario, Canada. Originally built for Canadian National Exhibition events, the stadium served as the home of the Toronto Argonauts of the Canadian Football League, from 1959–1988, the Toronto Blue Jays of Major League Baseball from 1977–1989, and the Toronto Blizzard of the North American Soccer League from 1979–1983.[3][4] The stadium hosted the Grey Cup game 12 times over a 24-year period.

In 1999, the stadium was demolished and the site was used for parking until 2006. BMO Field was built on the site in 2007 roughly where the northern end of the covered grandstand once stood.

The grandstand (known as CNE Grandstand) was used extensively throughout the summer months for hosting concerts.[5]

Exhibition Stadium was the fourth stadium to be built on its site since 1879.[1] When the original grandstand was lost due to a fire in 1906, it was quickly rebuilt.[1] A second fire destroyed the stadium in 1947, which led to the city constructing a covered north-side grandstand (known as CNE Grandstand) for CA$3 million in 1948.[6][7][8][9][10] This part of the stadium's structure stayed even as the stadium underwent various changes to its configuration over the years until its 1999 closure. 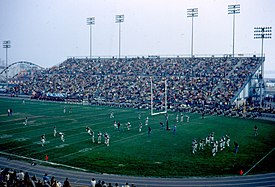 The inaugural game at the renovated Exhibition Stadium was an exhibition interleague game between the hometown Toronto Argonauts of the Canadian Football League (CFL) and the Chicago Cardinals of the National Football League (NFL) on August 5, 1959. The game was the first time an NFL team played in Toronto.[14][15] It was also the first NFL–CFL exhibition match held since the establishment of the CFL in 1958, and marked the beginning of a three-year, four game exhibition series between the leagues.

When the 58th Grey Cup was played at the stadium in 1970, Calgary Stampeders coach Jim Duncan described the condition of the natural-grass surface as "a disgrace."[16] In January 1972, Metropolitan Toronto Council voted 15–9 to spend $625,000 to install artificial turf. The vote passed despite five councillors changing their vote to oppose the motion, because the cost had increased from a previous estimate of $400,000.[17] Two months later, contracts totalling CA$475,000 were approved to install the AstroTurf, with work to be completed by June, in time for the start of the Toronto Argonauts' 1972 season.[18]

In 1974, in a bid to acquire a Major League Baseball team, the city voted to reconfigure the stadium to make it compatible for baseball,[19] leading to the arrival of Major League Baseball in Toronto in 1977 in the form of the expansion Toronto Blue Jays after a failed attempt to lure the San Francisco Giants to the city. 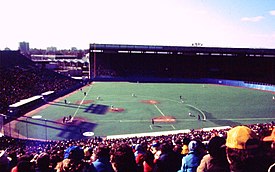 A Toronto Blue Jays game during the 1977 season

Originally planned to cost CA$15 million[19] before growing to CA$17.5 million ($79.7 million in 2021 dollars)[20], the renovations, which were funded by the city and province, added seating opposite to the covered grandstand on the first base side and curving around to the third base side.[1][2][21][22][23] Football capacity was increased from 33,150 before the renovations to 41,890 initially, then finally to 54,741 after work was completed.[19] Although the stadium was expanded to accommodate baseball, the new seats were first used for football and allowed the 64th Grey Cup in November 1976 to be watched by a then-Grey Cup record crowd of 53,467. For baseball, the stadium originally seated 38,522, however by the Blue Jays' second season this increased to 43,739,[24] although, only about 33,000 seats were usually made available (see below). 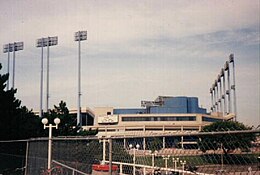 The stadium exterior in 1992

Like most multi-purpose stadiums, the lower boxes were set further back than comparable seats at baseball-only stadiums to accommodate the wider football field. Compared to U.S. stadiums, this was magnified by the fact Canadian football fields are almost 34% larger than American football fields.[note 1] Many of the seats down the right-field line and in right-centre were extremely far from the infield; they actually faced each other rather than the action. Some seats were as far as 820 feet (250 m) from home plate — the greatest such distance of any stadium ever used as a principal home field in the major leagues.[24] The Blue Jays realized early on that these seats were too far from the field to be of any use during the regular season. As such, they were only sold when necessitated by demand during the 1985 and 1987 pennant races. As the original grandstand was used for the outfield seats, these were the cheapest seats but were the only ones which offered some protection from the elements;[26] the Blue Jays were the only MLB team using a stadium with such a configuration.

Because the full length of the third-base line had to be fitted between the north stand (the original grandstand) and the new south stand, they could no longer be parallel to each other. As a compromise between placements suitable for the two stands, the football field was rotated anticlockwise away from the north stand.[27] Thus, the only seats as close to the field as before were those near the eastern end zone, and no seats had as good a view of the whole field as the centre-field seats before the conversion.

Problems with the wind and cold[edit]

Being situated relatively close to Lake Ontario, the stadium was often quite cold at the beginning and end of the baseball season (and the end of the football season). The first Blue Jays game played there on April 7, 1977, was the only major league game ever played with the field covered entirely by snow. The Blue Jays had to borrow Maple Leaf Gardens' Zamboni to clear off the field. Conditions at the stadium led to another odd incident that first year. On September 15, Baltimore Orioles manager Earl Weaver pulled his team off the field because he felt the bricks holding down the bullpen tarps were a hazard to his players. This garnered a win by forfeit for the Jays – the only time in major league baseball history since 1914 that a team deliberately forfeited a game (as opposed to having an umpire call a forfeiture).[28]

An April 30, 1984, game against the Texas Rangers was postponed due to 60 mph (97 km/h) winds. Before the game, Rangers manager Doug Rader named Jim Bibby as his starting pitcher, stating "he's the heaviest man in the world, and thus will be unaffected by the wind." However, Bibby would never make it to the mound. Two Rangers batters complained about dirt swirling in their eyes, and Blue Jays starting pitcher Jim Clancy was blown off balance several times. The umpires stopped the game after only six pitches. After a 30-minute delay, the game was called off.[29]

The stadium also occasionally had problems with fog, once causing a bizarre inside-the-park home run for Kelly Gruber in 1986, when an otherwise routine pop up was lost by the outfielders in the thick fog.[30] 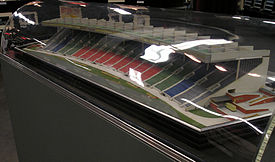 Original architectural model of the fourth Exhibition Stadium's grandstand, from 1948

As a popular feeding ground for seagulls[edit]

Due to its position next to the lake, and the food disposed by baseball and football fans, the stadium was a popular feeding ground for seagulls. New York Yankees outfielder Dave Winfield was arrested on August 4, 1983, for killing a seagull with a baseball. Winfield had just finished his warm-up exercises in the 5th inning and threw a ball to the ball boy, striking a seagull in the head. The seagull died, and some claimed that Winfield hit the bird on purpose, which prompted Yankees manager Billy Martin to state "They wouldn't say that if they'd seen the throws he'd been making all year. It's the first time he's hit the cutoff man". The charges were later dropped. Winfield would later play for the Blue Jays, winning a World Series with the club in 1992.

Exhibition Stadium's fate was sealed during the 70th Grey Cup in 1982, popularly known as "the Rain Bowl" because it was played in a driving rainstorm that left most of the crowd drenched. Many of the seats were completely exposed to the elements, forcing thousands of fans to watch the game in the concession section. To make matters worse, the washrooms overflowed. In attendance that day was then-Ontario Premier Bill Davis, and the poor conditions were seen by over 7.862 million television viewers in Canada (at the time the largest TV audience ever in Canada).[31] The following day, at a rally at Toronto City Hall, tens of thousands of people who were there to see the Toronto Argonauts began to chant, "We want a dome! We want a dome!" So too did others who began to discuss the possibility of an all-purpose, all-weather stadium.[32]

Seven months later, in June 1983, Premier Davis formally announced that a three-person committee would look into the feasibility of building a domed stadium at Exhibition Place. The committee consisted of Paul Godfrey, Larry Grossman and former Ontario Hydro chairman Hugh Macaulay.[33] That same year, the city also studied a number of potential sites for the new domed stadium, and in April 1984, CN agreed to donate 7 acres (2.8 ha) of land near the CN Tower for the stadium; groundbreaking began in October 1986, and the stadium, which would take on the name SkyDome (now Rogers Centre), opened in June 1989.[34]

Life following the opening of SkyDome and demolition[edit] 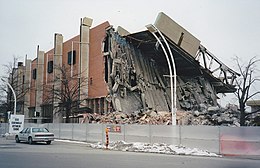 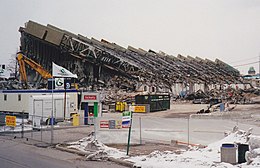 Demolition of the stadium in January 1999.

Exhibition Stadium lay mostly dormant over the decade following the opening of SkyDome (being used sometimes as a racetrack or a parking lot), except for the occasional concert or minor sporting event. The World Wrestling Federation (now WWE), needing a new venue after a decision to discontinue events at Maple Leaf Gardens in 1995, held one card at the stadium on August 24, 1996, for a crowd of 21,211. The main event was Shawn Michaels vs. Goldust in a ladder match.[35] A series of CASCAR races were held at the track during the 1990s, with the stadium being reconfigured for such races.

The stadium was demolished in 1999 and the site is now the location of BMO Field and a parking lot. A few chairs from the stadium can be found on the southeast corner just north of the bridge to Ontario Place's main entrance. As is common with stadium demolitions, a number of the remaining seats were sold to fans and collectors. The original locations of all bases and home plate are marked in the parking lot south of BMO Field.

The "Mistake by the Lake"[edit]

Although not widely used while the stadium was in operation (given the well known references to Cleveland's Municipal Stadium), the term "Mistake by the Lake" has been used more recently in reflection by Toronto media to refer to the now-demolished venue.[36]

On October 26, 2005, the City of Toronto approved CA$69 million to build BMO Field, a new 20,000-seat stadium, in almost the same spot where the old stadium once was. The governments of Canada and Ontario combined for CA$35 million, with the city paying CA$9.8 million, and Maple Leaf Sports & Entertainment paying the rest, including any runoff costs. Maple Leaf Sports & Entertainment got the naming rights of the new stadium, and has a Major League Soccer team in the new stadium, named Toronto FC. The stadium also held the 2007 FIFA U-20 World Cup along with other cities in Canada.

BMO Field was initially built as a soccer-specific stadium with field dimensions that were too small to accommodate a Canadian football field and was operated as such until 2015 when MLSE owners Larry Tanenbaum and Bell Canada agreed to purchase the Toronto Argonauts. As part of the agreement, BMO Field was renovated to allow the Argonauts to move back to the site in time for the 2016 CFL season. The stadium also hosted the 104th Grey Cup in 2016 and MLS Cups in 2010, 2016, and 2017, along with the outdoor NHL Centennial Classic game within a 35-day period.

^ A. Game was suspended with 9:29 remaining in the fourth quarter due to extremely dense fog, and completed the next day.