As a proprietary format, Sony exclusively used Memory Stick on its products in the 2000s such as Cyber-shot digital cameras, Handycam digital camcorders, WEGA and Bravia TV sets, VAIO PCs, digital audio players, and the PlayStation Portable game console,[2] with the format being licensed to a few other companies early in its lifetime. With the increasing popularity of Secure Digital around 2010, Sony started to include SD in their devices which was seen as a Sony loss in the memory-card business.[3] Despite this, Sony continues to support Memory Stick on certain devices.

The original Memory Stick, which was launched in October 1998, was available in capacities up to 128 MB.[4]

In October 1999, Sony licensed the technology to Fujitsu, Aiwa, Sanyo, Sharp, Pioneer and Kenwood, in a bid to avoid a repetition of the Betamax failure.[5] Other companies were also licensees to the format. Some early examples of Memory Stick usage by third-party companies include Sharp's MP3 players, Alpine's in-dash players, and Epson's printers.[6]

Initially the format had a lukewarm reception, but it soon increased in popularity, especially after the licensing deal. In spring 2001, Memory Stick attained 25% market share (against CompactFlash's 40% and SmartMedia's 32%), up from 7% a year earlier. By May 2001, total shipment of Memory Stick units surpassed 10 million.[6]

However the SD card, jointly developed by Toshiba, Panasonic and SanDisk, became widely popular among companies and soon became the most popular flash format – by November 2003 it held 42% market share in the United States, ahead of CompactFlash's 26% and Memory Stick with 16%.[7] Eventually Sony itself became the only company to support the format. Sony was often criticized for the Memory Stick, as they were deemed to be expensive compared to other formats.[8]

As of January 2010[update], it appeared that Sony had begun to combine support for SD/SDHC and Memory Stick formats in their products. All digital cameras and camcorders announced by Sony at the 2010 Consumer Electronics Show could use SD and SDHC cards as well as Memory Sticks.[9][10][11][12][13] Furthermore, Sony announced the release of its own line of SD cards.[14] Many claimed this development as the end of the format war between Memory Stick and SD card. However, Sony did not abandon the format at this time, and indicated that it would continue development of the format for the foreseeable future. A prime example was the development of WiFi transfers through a special Memory Stick PRO-Duo which was still in development as of 2011[update].[15][16][17][18][19][20][21]

Sony's first significant migration away from Memory Stick did not come until 2019, when it introduced the α7R IV full-frame mirrorless interchangeable-lens camera without Memory Stick support, opting instead for dual SDXC slots.[22] 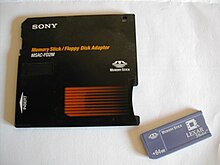 Typically, Memory Sticks are used as storage media for a portable device, in a form that can easily be removed for access by a personal computer. For example, Sony digital compact cameras use Memory Stick for storing image files. With a Memory Stick-capable memory card reader a user can copy the pictures taken with the Sony digital camera to a computer. Sony typically included Memory Stick reader hardware in its first-party consumer electronics, such as digital cameras, digital music players, PDAs, cellular phones, the VAIO line of laptop computers, TV sets under the WEGA and Bravia names, and Sony's handheld gaming device, the PlayStation Portable.

A special Memory Stick can be inserted in the hindquarters[23] of Sony's AIBO robot pet, to enable the use of Aiboware—software intended for use on AIBOs. The Sticks include a copy protection mechanism used by the robot, allowing users to write programs. These are referred to as programmable or programming. Only 8 MB and 16 MB versions are available.

An adapter was made for the original Memory Stick that allowed them to be used in a floppy disk drive. This adapter, which took CR2016 cells for power, was meant for those who did not have an existing Memory Stick drive. 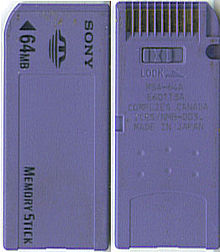 The original Memory Stick is approximately the size and thickness of a stick of chewing gum. It was available in capacities from 4 MB to 128 MB (1 MB = one million bytes). It was available both with and without MagicGate support. The MagicGate-capable memory sticks were white-colored, while the standard version was purple. The original Memory Stick is no longer manufactured. 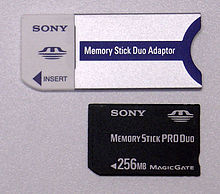 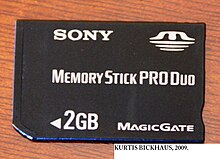 Not to be confused with M.2, a form factor for expansion cards.

The M2 comes with an adapter, much like the Duo Sticks, to ensure physical compatibility with Memory Stick PRO devices. However, not all devices with a PRO slot are compatible with the M2/Adapter combination, as the firmware of older devices don't support the higher capacity of some M2 cards. One example is certain Sony CLIÉ PDAs which don't support cards larger than 2 GB.[32]

Sony announced on June 1, 2009, that M2 support in Sony Ericsson phones would be dropped in favor of microSD.[33]

The Sony DSC-RX0 Mark II made a revived usage of M2 slots.

On January 7, 2009, SanDisk and Sony announced the Memory Stick XC format (tentatively named "Memory Stick Format Series for Extended High Capacity" at the time).[34][35] The Memory Stick XC has a maximum theoretical 2 TB capacity, 64 times larger than that of the Memory Stick PRO Duo which is limited to 32 GB. XC series has the same form factors as PRO series, and supports MagicGate content protection technology as well as Access Control function as PRO series does. In line with the rest of the industry, the XC series uses the newer exFAT file system due to size and formatting limitations of FAT/FAT16/FAT32 filesystems used in the PRO series.[36][37] A maximum transfer speed of 480 Mbit/s (60 Mbyte/s) is achieved through 8-bit parallel data transfer.[38] No Memory Stick XC cards were released to the market, likely due to domination of SD cards; its equivalent here is named SDXC and eventually became more successful than any other exFAT-based memory card format.

As of early 2008, Mark 2-certified versions of the Memory Stick PRO Duo became available. The Mark 2 designation indicates the Memory Stick is suitable for use with AVCHD recording products or other faster Memory Stick enabled devices by providing appropriate minimum write performance.[40]